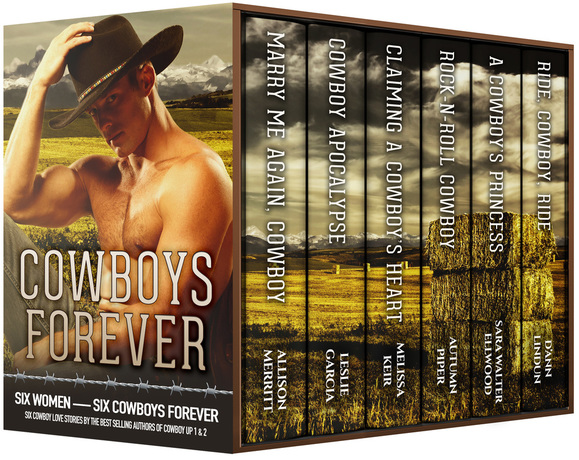 Greer Daily is happy running the ranch she inherited from her father until a resort opens up next door and unruly guests terrorize her livestock and destroy her fences. After she confronts two of them and the situation gets sticky, she finds herself venting her fury on sexy resort owner Guy Carter. But the smooth-talking cowboy isn't getting out of this mess easily. She wants reparations for her trouble.

Guy's first initial meeting with Greer could've gone better, but he hopes to placate her fiery temper by making amends for the fences. When a judge calls them out for being irresponsible and self-absorbed, then orders them to marry, Guy's whole world is upended. Their choices: Six months of marriage or a month of jail time. How bad can a few months with the queen of the cattle range be? Heaven if he can get her to bend, hell if she maintains her starchier than pressed jeans attitude.

​Just as something deeper than friendship blossoms between them, Guy's personal assistant throws a wrench into the marriage of inconvenience. If Greer and Guy can't overcome that particular pothole, they have more to lose than their freedom--a lifetime of love.
~~~
Cowboy Apocalypse by Leslie Garcia
Can a former Marine and a Hollywood diva facing apocalyptic changes in their lives salvage new beginnings together?

When Stone Winters joined the Marines, he always meant to come home. A woman’s impossible dream kept him away so long that he doesn’t think there’s anything left—especially not when he meets Price Adams, a film star with another impossible dream. He just doesn’t think he’s up for that again.

Price Adams traded in a childhood on her grandparents’ ranch for Hollywood glitz in spite of being a teenage mother. Torn between the stardom she won and full-time custody of her daughter, she accepts one last role

—in Cowboy Apocalypse, an inane movie about zombies being filmed on ranches around deep south Texas. Burned by men more times than she can remember, Price doesn’t want a man in her life—especially not one who looks down on her career and the courage she needs to let it all go.
~~~
Claiming A Cowboy’s Heart by Melissa Keir
Even broken souls deserve a second chance at love…

Elementary Teacher, Michelle Alt’s faced untold trials in her life, yet she continues to do what’s right to make things better for the next generation.

Cowboy Veterinarian, Preston Hall has lost everything in order to follow his dreams and return to his grandfather’s small town practice.

These two broken souls recognize each other’s pain and come together to heal, but fear and misunderstandings send their blossoming relationship into a tailspin. Will they be able to put aside their pain to find the love of a lifetime?
~~~~
Rock-n-Roll Cowboy by Autumn Piper
Never judge a rock band by its cover song.

A cowboy leading a rock band? Logan gets an earful from his dad every time he leaves the house to perform. His rock persona destroys his ranching cred with the old-timers, and sticking to the cowboy life instead of running off to Hollywood cost him his girlfriend. Yet, he dreams of success in both worlds, and he’s determined to find a way.

Melody agrees to run a publicity campaign for a local rock band, fully immune to the sexy lead singer’s magnetism—she had childhood experience with a rocker’s absences. Still, Logan is charming, and vulnerable. And persistent…

Logan can tell Melody’s PR plan is his passport to popularity. He has to keep his hands off her, or he just might blow his one shot at making it big.
~~~~
A Cowboy's Princess by Sara Walter Ellwood
Oil and water don't mix...neither does Texas oil royalty and an ex-Navy SEAL turned rodeo cowboy until danger forces them together.

All retired Navy SEAL turned rodeo cowboy Justin Tanner wants is to get to his next rodeo when a vision in a pair of tight fitting jeans walks up to him and hands him his deepest desire on a silver platter—the deed to his father’s ranch, land her grandfather had swindled him out of.

Lacey Mackenzie is true Texas oil royalty, but when her grandfather dies and leaves her the keys to the kingdom, she finds herself with more enemies than friends and only Justin’s name as the one who can protect her, but can he after she discovers only the oil under his promised ranch can save her company. When her enemies attack, he’s duty bound to save her, but can he give her the one thing she wants after a hot night of passion—his heart?
~~~~~
Ride, Cowboy, Ride by D’Ann Lindun
Can they find freedom together?

A locked up heart.
After imprisoned in a federal penitentiary for ten years over a woman's betrayal, the last thing Lyle Landry is looking for is love.  A quick tumble?  Sure.  A cold beer?  Absolutely.  And then he's on to the rodeo circuit to reclaim his title.

Broke, busted and blue.
After her ex-husband leaves her high, dry and dead broke, another man isn’t high on Sarah Reed’s list. Especially a sexy ex-con who makes it perfectly clear he’s not interested in more than a one night stand. But his determination to make something out of himself impresses her more than she wants to admit, and she falls hard for the cowboy.