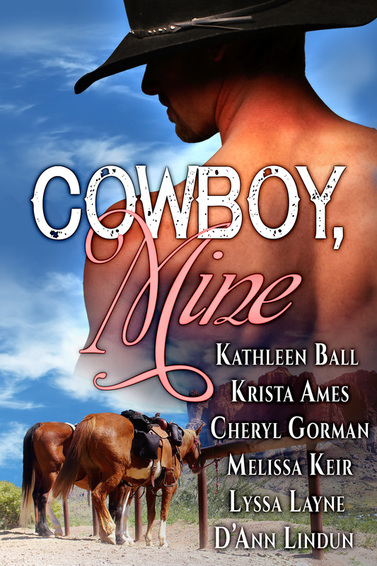 Six Sexy Cowboys for less than one dollar!
​Amazon

Cowboy, Mine... He'll Leave You Breathless...
By: The best-selling and award-winning authors….
Kathleen Ball, Krista Ames, Cheryl Gorman, Melissa Keir, Lyssa Layne, and D’Ann Lindun
​
Texas Haven Kathleen Ball
Can love shine through the clouds of treachery and misunderstanding?
Advertising for a wife seems like the answer to all of Burke Dawson's problems. He wants a wife and kids without emotional attachments, but he has no idea how much havoc one woman can cause.
Annie Douglas has her heart set on her hunky cowboy's love and she isn't about to stop until she gets it.


Honeymoon Ranch by Cheryl Gorman
Can two reluctant partners ride off into their own blissful sunset on Honeymoon Ranch?
When wedding planner, Summer Conroy, discovers she has inherited half of Silver Creek Ranch, she is stunned to learn the other half is owned by sexy cowboy, Bryce Jericho. Her idea of turning the ranch into an exclusive wedding and honeymoon destination is met with a wall of resistance from Bryce who doesn’t want his ranch ruined with a bunch of wedding nonsense. He is determined to conceal his vulnerable heart that beats in fear of being betrayed again. Will this woman with dreams of happily-ever-after in her eyes transform his fear into love everlasting?


Chalkboard Romance by Melissa Keir
Will a One Night Stand prove to be their disaster or their salvation?
Lauren Walsh, a divorcee and elementary teacher, wants to feel sexy again after her ex tosses her aside for a younger woman. Her best friend encourages her to sign up for The Playhouse--a renowned dating agency. Forced to stay away from his young son, Mac Thomas lost the ability to trust. After the death of his wife, he returned to care for his son but his sister wants more for him. She sets him up with The Playhouse.
Passion ignites but Mac’s a parent of one of Lauren’s students. A teacher and a parent dating could cost Lauren her job and her chance at happiness. Will Mac be able to convince the school and Lauren, that love is the most important thing?


Until You Fall in Love by Lyssa Layne
Can a longtime friendship suddenly blossom into love?
Single mom Jordan Glastetter doesn't know how she'd survive without her best friend, Abram Tomko. He's the father her son never knew and he's the rock she's always leaned on.
When Abram's father suffers a heart attack, it's Abram's turn to depend on Jordan, finally seeing her as the woman she's become and not the little girl he grew up with.
Will they risk their friendship for a chance at love?


The Cowboy’s Baby by D’Ann Lindun
Cat wanted to keep her baby: Tanner insisted she give it up...can they find common ground seventeen years later?
Cat O’Brien left her heart in Granite, Colorado, seventeen years ago—her first love, Tanner Burke, and the baby girl she gave birth to at sixteen. Suddenly, both Tanner’s high school sweetheart and the teenage daughter they gave up for adoption are back in his life.
Cat is adamant their daughter keep her baby; Tanner isn’t as sure. Just like seventeen years before, he and Cat are butting heads over the fate of an unborn child.