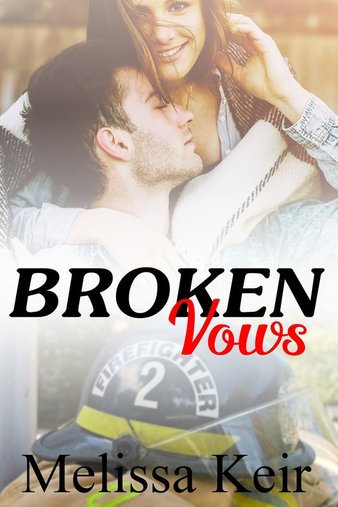 Rick and Julie Tyler are happily married ranchers who raise and train horses. When money becomes tight, Rick becomes a firefighter in order to make ends meet, but he’s forced to move out of state if he wants more money and a chance to become a station chief.

Distance causes problems for the happy couple and turns their world upside down. When Julie puts her foot down, will Rick decide to make the right choice, or will their vows break?

Stunned, she stared at the phone. She’d known a move to another firehouse was a possibility. But to another state? Whisper, Colorado had always been her home. She’d grown up here, met and married her husband, and they’d bought their first home—all within the city’s boundaries. However, her husband’s career had stagnated. He’d reached the top of his pay scale and position. If he wanted to become a fire chief, he’d need to leave their hometown.

“Did you hear me?” His deep voice echoed through the phone, sending tingles down her spine. Julie loved how his voice still turned her on. How lucky she was. Many of her friends barely tolerated their husbands after four years of marriage, but she and Rick still acted like newlyweds.
“I heard you. I can’t help it if your voice sends my mind down other avenues. I’ll see you when you get home in the morning. Take care and be safe.” She sighed, wishing she wasn’t sleeping alone tonight.

“Love you.” He chuckled, sending another shiver through her.

“Love you more.” She held her emotions in check. The saying was their way of always acknowledging how much they meant to each other. Rick’s job put him in danger too often for her to forget each goodbye could be their last. No matter what, they always ended each parting—in person or on the phone—the same way.

Julie paced through the living room of their ranch house. She recalled the day they’d finally gotten the keys, making it theirs.

Rick had carried her through the door in his arms but tripped over a box the previous owners had left in the foyer. He’d stumbled and fallen to his knees, almost dropping her. He’d cradled her against his muscular chest, keeping her safe. Curse words had flown from his lips while she’d tried to stifle her giggles. He’d been so frustrated, however, she’d found a way to relax him.

Julie’s face heated as she remembered how they’d christened each room that night. She rolled her shoulders, recalling her stiffness for days afterward. Sleeping on the floor never felt so good.
​
Each corner, each room filled with memories. She teared up as she thought about moving. Not only would they have to leave their home, but she doubted there’d be room for a horse farm in inner city Detroit. She would have to say goodbye to not only her friends, but also the animals she’d raised and grown to love. Rick had enjoyed running the ranch, caring for the horses, but the bills stacked up. He’d always dreamed of helping others and, to him, being a fireman offered the perfect way. Too bad being a horse breeder didn’t earn more money.